Indian Sr. Leema Rose is a member of the Missionary Sisters, Servants of the Holy Spirit and heads the Catholic Health Training Institute in Wau, South Sudan, where she oversees a nursing training program for certified nurses and midwives.

Sr. Kavita with mother and new born. Every year, around 700 pregnant women come to our clinic for a check-up. Most of them deliver their baby in their homes and the difficult cases come to the clinic. These difficult deliveries are always a nightmare for us in Weragu, Ethiopia. The joyful event of giving birth can suddenly turn into an unforeseen crisis.

Sr. Magdalena, Christine Barbara Eichinger, SSpS is a member of Religious in Europe Networking against Trafficking and Exploitation (RENATE). The members are working alongside many other organizations around the world to eradicate modern-day slavery. A few months ago, thirty RENATE members gathered at the Soeterbeeck Conference Centre for a seminar.

Sr. Veronika from Slovakia was a Missionary Sister of the Holy Spirit (SSpS). She has been working in South Sudan over the past six years. She was a medical doctor. She has been in charge of St. Bakhita Health Center in South Sudan, where she saved many women and babies lives.

I have been working as a chaplaincy in the women ?s prison in Berlin for more than a year. In the beginning it was a very strange world with big walls, loud noise of opening and closing big doors. I was afraid to enter the prison cells.

The National Commission of HIV/ AIDS, in Timor-Leste began to emerge even before independence, starting with only a few cases. The number, however, has increased every year. As the commission reported last year, in the past 13 years more than 600 cases were discovered, of which 29% were young people aged 15-24, 59% were people aged 25-44 and 9 % were people aged 45 years and older. The remaining percentages are children aged 14 years and younger. However, these numbers are limited to data from hospitals and clinics. The HIV in Timor-Leste is like the tip of an iceberg, which will be a huge problem later if it’s not handled properly. 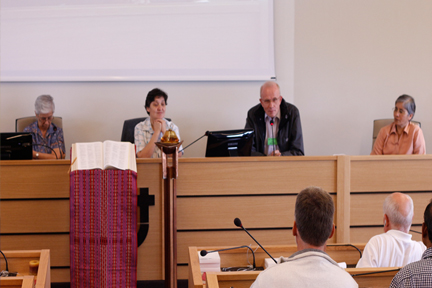